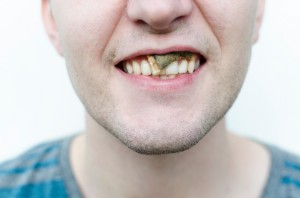 Tobacco use is rampant in the United States. Roughly 42 million people are habitual tobacco users. Of this number, many will develop conditions such as lung cancer, emphysema and more. Tobacco is enjoyed by people in several different ways including cigarettes, smokeless tobacco (“dip”), or cigars. Nicotine is highly addictive, which explains why so many people are tobacco users. We’re here to tell you that it’s in your best interest to kick the habit while you still have time. You see, it isn’t just your overall health you’re putting at risk, it’s your oral health, too. Our Beachwood, OH office wants you to know that your oral health is very important and tobacco use can leave it in bad shape. Bad oral health has a major impact on your overall health. As the Beachwood dentist of choice for residents in the area, Dr. Hornstein has firsthand the effects tobacco has had on many patients. He and the rest of our dental staff want you to live your life free of tobacco and with the best oral health of your life.
END_OF_DOCUMENT_TOKEN_TO_BE_REPLACED

The Scottish Health Survey ( which draws a nationally representative sample of the general population living in households in Scotland) had an objective  to see if self reported tooth brushing behaviour is associated with cardiovascular disease and markers of inflammation.

The study concluded that poor oral hygiene is associated with higher levels of risk of cardiovascular disease and low grade inflammation, though the causal nature of the association is yet to be determined.

Infrequent tooth brushing is associated with cardiovascular disease, even after adjustment for age, sex, socioeconomic group, smoking, visits to dentist, BMI, family history of cardiovascular disease, hypertension, and diagnosis of diabetes.  These results largely confirm those of previous studies.  The role of oral health in the etiology of cardiovascular disease has received considerable attention. Periodontal disease is a complex chronic inflammatory disease, resulting in a loss of connective tissue and bone support of the teeth.  It is a major cause of tooth loss in adults aged over 40, and, according to the World Health Organization, affects people worldwide at prevalence rates of up to 10-20% for the most severe forms. Periodontal disease is highly prevalent, especially in late middle age when coronary artery disease is also most common, and it is caused mostly by poor oral hygiene.

Given the high prevalence of oral infections in the population, doctors should be alert to the possible oral source of an increased inflammatory burden. In addition, educating patients in improving personal oral hygiene is beneficial to their oral health regardless of the relation with systemic disease.

Gum Disease and Your Overall Health

The American Academy of Periodontology (AAP) estimates that approximately three out of four Americans suffer from some form of gum disease — from mild cases of gingivitis, to the more severe form known as periodontitis. However, despite this prevalence, approximately only three percent seek treatment for their gum disease. With increasingly more research indicating that gum disease may be linked to several other diseases, including diabetes, heart disease and certain forms of cancer, maintaining healthy teeth and gums has become more important that ever.

According to Samuel Low, DDS, MS, Associate Dean and professor of periodontology at the University of Florida College of Dentistry, and President of the American Academy of Periodontology, the discrepancy between the prevalence of gum disease and the lack of treatment can likely be blamed on a lack of understanding of the effect periodontal disease can have on overall health. “Patients do not always seek the periodontal care they require because they are not aware of the long-term and potentially dangerous implications of untreated gum disease,” says Dr. Low. “Unfortunately, there are a variety of myths surrounding periodontal disease and its repercussions.”

In order to help distinguish between fact and fallacy regarding periodontal disease, the AAP has identified and addressed below some common misconceptions about oral health.

2. You don’t need to floss every day. Routine oral care, which includes brushing after every meal and before bedtime, and flossing at least once a day, is the best way to prevent gum disease. However, a recent survey estimates that only 13.5 percent of Americans floss each day. It is vital that you keep up with your daily oral care, and see a dental professional for a thorough check-up twice a year. If gum disease is diagnosed, a consultation with a periodontist, a dentist who specializes in treating periodontal disease, may be beneficial.

3. A visit to the periodontist will be scary. Periodontists are gum disease experts. They have received three or more years of specialized training following dental school centered on the diagnosis, treatment and prevention of periodontal disease. Periodontists are equipped with the latest treatments and technologies, using innovative tools such as digital radiography, ultrasound technology, biomarker measurement and laser therapy to help make your visit more comfortable.

4. A tooth lost to gum disease is a tooth lost forever. Gum disease is a major cause of tooth loss in adults. However, in addition to treating gum disease, periodontists are also experts in placing dental implants — a convenient and comfortable way to permanently replace missing teeth. A dental implant is an artificial tooth root that is placed into the jaw to hold a replacement tooth. Studies have shown that dental implants have a 98 percent success rate, and with proper care, allow you to speak, eat and smile with confidence. In fact, a survey conducted by the American Academy of Periodontology found that over 70 percent of respondents reported being “pleased” or “extremely satisfied” with the results of their dental implants.

5. Poor oral hygiene is the only way to develop gum disease. Forgoing good oral hygiene can certainly contribute to the progression of gum disease, but there are a variety of other factors that can also impact your risk. For instance, tobacco use has been shown to greatly increase your chance of developing gum disease. Stress, poor diet, and even genetics, can also play a role in the health of your gums.

About the American Academy of Periodontology

The American Academy of Periodontology (AAP) is the professional organization for periodontists — specialists in the prevention, diagnosis, and treatment of diseases affecting the gums and supporting structures of the teeth, and in the placement of dental implants. Periodontists are also dentistry’s experts in the treatment of oral inflammation. They receive three additional years of specialized training following dental school, and periodontics is one of the nine dental specialties recognized by the American Dental Association. The AAP has 8,000 members world-wide.

Comments Off on Gum Disease and Your Overall Health