Snoring and Sleep Apnea can raise the risk of cancer 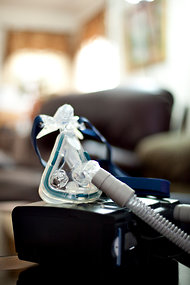 Two new studies have found that people with sleep apnea, a common disorder that causes snoring, fatigue and dangerous pauses in breathing at night, have a higher risk of cancer. The new research marks the first time that sleep apnea has been linked to cancer in humans.

About 28 million Americans have some form of sleep apnea, though many cases go undiagnosed. For sleep doctors, the condition is a top concern because it deprives the body of oxygen at night and often coincides with cardiovascular disease, obesity and diabetes.

“This is really big news,” said Dr. Joseph Golish, a professor of sleep medicine with the MetroHealth System in Cleveland who was not involved in the research. “It’s the first time this has been shown, and it looks like a very solid association,” he said.

Dr. Golish, the former chief of sleep medicine at the Cleveland Clinic, said that the cancer link may not prove to be as strong as the well-documented relationship between sleep apnea and cardiovascular disease, “but until disproven, it would be one more reason to get your apnea treated or to get it diagnosed if you think you might have it.”

In one of the new studies, researchers in Spain followed thousands of patients at sleep clinics and found that those with the most severe forms of sleep apnea had a 65 percent greater risk of developing cancer of any kind. The second study, of about 1,500 government workers in Wisconsin, showed that those with the most breathing abnormalities at night had five times the rate of dying from cancer as people without the sleep disorder. Both research teams only looked at cancer diagnoses and outcomes in general, without focusing on any specific type of cancer.

In both studies, being presented in San Francisco this week at an international conference organized by the American Thoracic Society, the researchers ruled out the possibility that the usual risk factors for cancer, like age, smoking, alcohol use, physical activity and weight, could have played a role. The association between cancer and disordered breathing at night remained even after they adjusted these and other variables.

Dr. Mitesh Borad, a cancer researcher and assistant professor of medicine at the Mayo Clinic who was not involved with the studies, called the findings “provocative” but said more research was needed to confirm the association. The studies were observational, and other, unknown factors may account for the correlation between sleep apnea and cancer.

Recent animal studies have suggested that sleep apnea might play a role in cancer. When mice with tumors were placed in low-oxygen environments that simulate the effects of sleep apnea, their cancers progressed more rapidly. Scientist speculate that depriving mice of oxygen may cause their bodies to develop more blood vessels to compensate, an effect that could act as a kind of fertilizer for cancer tissue and cause tumors to grow and spread more quickly.

The researchers wondered whether a similar relationship might exist in people with sleep apnea, in whom throat muscles collapse during sleep, choking off the airway and causing gasping and snoring as the body fights for air. Severe sleep apnea can produce hundreds of such episodes each night, depleting the body of oxygen.

In one study, a team at the University of Wisconsin School of Medicine and Public Health examined data on state workers taking part in the long-running Wisconsin Sleep Cohort, who since 1989 have undergone extensive overnight sleep studies and other measures of health about every four years. The landmark project was one of the first to reveal the widespread occurrence of sleep apnea in the general population.

The researchers found that the more severe a person’s breathing problems at night, the greater the likelihood of dying from cancer. People with moderate apnea were found to die of cancer at a rate double that of people without disordered breathing at night, while those in the severe category died at a rate 4.8 times that of those without the sleep disorder.

“That is really striking,” said Dr. F. Javier Nieto, one of the study’s authors and chairman of the department of population health sciences at the University of Wisconsin. “It could be something else, but it’s hard to imagine that something we didn’t control for is causing this.”

In the second study, researchers with the Spanish Sleep Network took a slightly different approach, looking not at cancer mortality among apnea patients, but at the incidence of cancer. They used a measure called the hypoxemia index, which looks at the amount of time the level of oxygen in a person’s blood drops below 90 percent at night.

About 5,200 people were followed for seven years, none of whom had a cancer diagnosis when the study began. The researchers found that the greater the extent of hypoxemia, or oxygen depletion, during sleep, the more likely a person would receive a cancer diagnosis during the study period.

People whose oxygen levels dropped below 90 percent for up to 12 percent of the total time they were asleep, for example, had a 68 percent greater likelihood of developing cancer than people whose oxygen levels did not plummet at night, said study author Dr. Miguel Angel Martinez-Garcia of La Fe University and Polytechnic Hospital in Spain. As time spent without oxygen increased, so, too, did cancer risk.

Although the study did not look for it, Dr. Martinez-Garcia speculated that treatments for sleep apnea like continuous positive airway pressure, or CPAP, which keeps the airways open at night, might reduce the association.

The Wisconsin study also did not specifically look at the impact of treatment for apnea on survival, either, but when people who were being treated with CPAP were removed from the analysis, the cancer association became stronger, “which is consistent with the hypoxemia theory,” Dr. Nieto said.

“I would say that this is one more instance that shows that sleep apnea can have profound impacts for people’s health,” he added. “Not breathing while you’re sleeping is a serious problem.”